Saw VH at the US Festival in high school. EVH helped Allan Holdsworth with Hodlsworth’s Road Games EP, and was slated to be on it but his schedule was an issue. Frank Zappa praised EVH for how unique ad individual he sounded. He was a guitarists guitarist.

Fair Warning was IMO EVH at his absolute zenith. It was angry, aggressive, experimental (his whammy shows a nod to Holdsworth, who he helped because when he met Holdsworth, Holdsworth had to sell his guitars to pay bills), his tonality razor sharp, but also had a whimsical style. This album as well as his solo on Michael Jackson’s “Beat It” is what I put into the vault when it comes to EVH, before he got into synths and more pop rock with Sammy Hagar (and his misogynist lyrics that are cringe worthy considering it was written by a 40+ year old man instead of Warrant). Fair Warning is a guitar album, it’s pure EVH.

Yep @drummer , EVH had a hugh influence on guitarists even if some (the rare unknown whatever) might say otherwise.

He also never forgot who influenced him, especially Eric Clapton. It was an interview with EVH where he mentioned Holdsworth is how I got into Holdsworth. What derailed EVH was substance abuse (a family member used to work at the Betty Ford Center, when both EVH and AVH were patients, and she mentioned how well he made his bed to which he said “Yeah, my wife is going to be surprised when I get home”), and the band itself not having the front man swagger of David Lee Roth that was a perfect fit for EVH’s own guitar swagger.

The most memorable EVH moment of all time - EVH paired with Gerald Ford, Fuzzy Zoeallar, and Bob Hope in a foursome at the Bob Hope Desert Classic here where I live. All you heard was “Keep your head down Eddie” at the tee lulz. He finally put the ball in the hole, cracked open a Schlitz Malt Liquor, looked at the camera and said “I got one!”.

Too bad he went into some kind of abuses also.

The Holdsworth s storie s sad also, meaning having to sell gear, of which I think was dear to him in order to pay the bills, is a bad thing.

Hard to make a living out of music, specially when it s a niche as Holdsworth s

If I do remember well he was in The Tempest band in the 70s or such. Yep, a very popular tune when it came out right @leo00 I was there lol. Their set left much to be desired however. They were piss hammered as well. Scorpions and Judas Priest were the highlights, Motley Crue was just in it’s infancy and clammed a tune at the beginning of it (and had to restart it lol), and if the water had anything that would had made men sterile, America would had had a sharp decline in birth rate, because it was a sea of mostly dudes in the crowd.

David Lee Roth made fun of The Clash, who played the day before. “The only people who put tea in a Jack Daniels bottle are The Clash!”, much to the delight of the sea of drunken dudes.

The first US Fest was the best. Talking Heads with the Remain in Light band was the best show I still have ever seen. They had a whole sea of people bobbing with their super tight funk.Tom Petty, Grateful Dead, The Police (who I think had Herbie Hancock sit in but I was high on shrooms so my memory might not recall details that well lulz. The shrooms kicked in when Talking Heads were on, and The Police were on after them), one ticket got you all three days where the next was one ticket per day. I was in my second year of high school too lol. Good times.

Is this you in the vid?

Not a huge fan but I cannot deny the huge influence he has had on the guitar world.

VH II is really the only album that I can dig (despite what I posted about Fair Warning, and that’s more about EVH at his zenith) because it’s the rawest one out of the Roth albums, even the first. It has the faster VH tunes on it, like Light Up The Sky. DOA has a bit of a punk edge (it’s like a must for my rock senses lol), and yeah it does have a pop tune or two on it, but at least the aforementioned balances it out.

What EVH wasn’t, was a synthesist. His synth playing compared to what had been done and especially what was happening in the 80’s wasn’t near as sophisticated as his guitar. It just wasn’t able to match it, and not able to match say Gary Numan, or an Eddie Jobson, or the Pet Shop Boys even. To be fair that’s what they do, EVH didn’t and they couldn’t play guitar like EVH either, but synths create more mood and atmosphere, and EVH kind of ham fisted a lot of the synth parts in those VH tunes. The synth patches sounded generic, like they were done on a Casio. I know he wanted to move the band post DLR into a new direction, but you can’t be a butt rock and a synth pop band at the same time, and if you’re gonna write songs with synths in mind, better to have an actual synth player who plays better synth than yourself to write them.

I think VH as a band - especially after losing Marc Anthony - just stopped writing good songs. 1984 is a pop record, not a VH one IMO. Diver Down is flat out horrid really. I don’t know what EVH would had done solo career wise, but I figure it would sound like latter day VH.

RIP EVH, may you and Allan shred up in heaven: Nop, some YT vlog that I follow if it s asked me @drummer

Yeah I was gonna compliment you on all your guitars lulz. I haven’t caught up with the family scrapbook here.

Thankfully, it wasn’t a Rick Beato vid. He posts a vid a day posting an opinion about something. I am like “Does this guy have a job?” since any YouTube page I browse has him all over it.

Thx anyways but no. It would ve been kind of you. 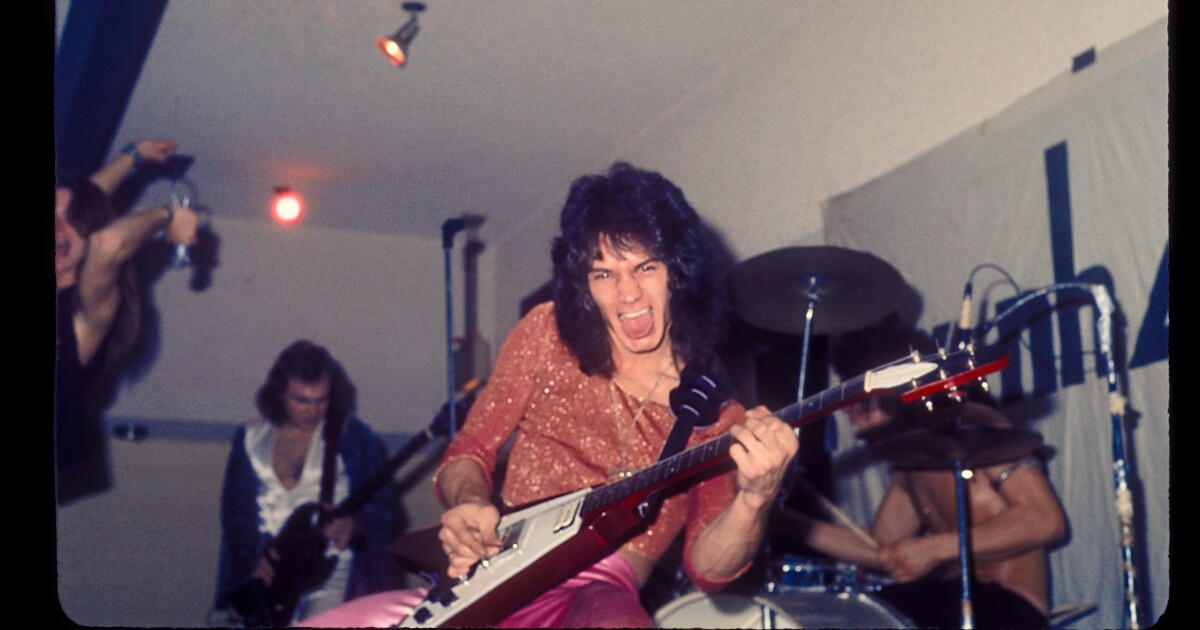